I left Taipei for Hualien right on 26 November at the first day after finishing my Chinese course at NCCU, starting my 7-day trip around this beautiful island. I felt a little bit moody that day when packing and moving out of my beloved dormitory at NCCU. Thinking about my very first days setting my very first steps on the uphill dormitory, thinking about the first day getting lost at the longest trail reaching the main entrance of this university, I can’t help feeling sad. Thanks to the great support of Tam, a Vietnamese friend of mine and many other nice Taiwanese friends on the way, I managed to move my 45-kilogram luggage (It was not until when I reached Taoyuan Airport that I realised how heavy my luggage was) to the downhill campus and leave them at the dorm of Tam. Even when I knew that I would get back to NCCU and Taipei the following week, the feeling of leaving something that had been a part of my life for the last three months was really unbearable.

View from the roof of my dorm building 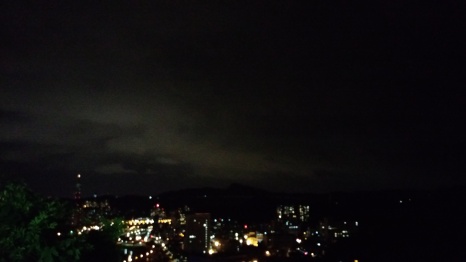 Night view of Taipei from my dormitory

After picking out necessary stuff for my next 7-day trip around Taiwan, I said goodbye to Tam and headed for Songshan Station, where I caught train to Ruifang Station then bus to Bitoujiao. Thing, however, did not come up as planned. I mistook the high-speed train for ordinary train, reaching Ruifang after being penalised for not buying the HSR ticket and was unable to find the bus route to go to Bitoujiao. Therefore, instead of going to Bitoujiao first then leaving Bitoujiao for Hualien,I decided to buy the ordinary train ticket to go to Hualien immediately. Fortunately, I bought the ticket with a seat beside the window so four-hour traveling was quite interesting when I could have a look at beautiful scenery ranging from forest, river to paddy field and ocean. I still felt a little bit moody, staring at the GPS point on my Google Maps and realized how far I had been from Taipei and silently sang the song “Memory” (記念) of Tanya Chua, which added more romantic feelings to my travel. 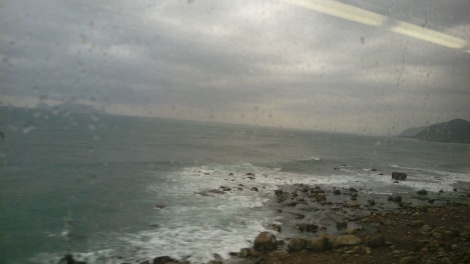 It was around 7pm when I reached Hualien Station. After setting very first steps out the Station, a feeling of scary suddenly came across my mind. Hualien is not as busy as Taipei and it somehow made me remember the little towns in the Center of Vietnam like Phu Yen, Ninh Thuan. It was the first time I really had a trip on my own and I stayed in a hostel so it was a little bit scaring to me. When in Taipei, I stayed in the school dormitory and at least school can be considered my home. However, when in Hualien, I started to realise that I was on my own. It took me around 5 minutes to locate my hostel, Big Bear Hostel. As I was so tired after a day busy moving out and traveling, I decided to buy some snack at 7 Eleven right at the street corner. What I really appreciated during my time in Taiwan is its people’s compliance with law. Even in Hualien, a little town in Taiwan, the pedestrians wait for the green light and walk right on the zebra crossing. After checking the weather of the following day and knowing that it might rain hard, I decided to book a tour to Taroko National Park with the hostel owner.

It turned out to be a wise choice, at least to me. One person of the tour agent came by the hostel at 8am to take me to Hualien Station, where I got on another bus with around 30 tourists. It seemed that there were only Chinese-speaking tourists on my bus that day so the driver cum the tour guide introduced to tourists a lot of information related to Hualien and Taroko. I did not expect that having a tour guide was that useful because back in Vietnam, the tour guide that we had when traveling by big group often provides with few information related to the destination but trying so bad to entertain us with songs or jokes. Perhaps it is the good thing that the driver is the tour guide at the same time so he is too busy to over-entertain the tourists. The tour guide/driver shared with us information related to Hualien, its aborigines, Hualien City’s policy of promoting the minority there. On the bus, I sat by an old man and his daughter. This man should be around 70 years old while his daughter was around 40 years old. After a quick chitchat, I knew that the old man came from Pingtung while her daughter had migrated to Canada for around 25 years. She just came back and had a trip with her father. While I took some photos, that daughter came to me and said that her father wanted to offer me with a cup of coffee. I was so surprised and asked her about the reason for such special treat. The reason was very simple, she said, “Because you come here alone.” We, however, did not chat a lot then but focused on enjoying the beautiful scenery on the way as much as possible. It was a pity that it rained so hard that day but the beautiful scenery compensated any disappointment caused by the rain. 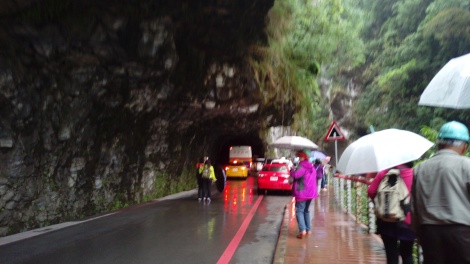 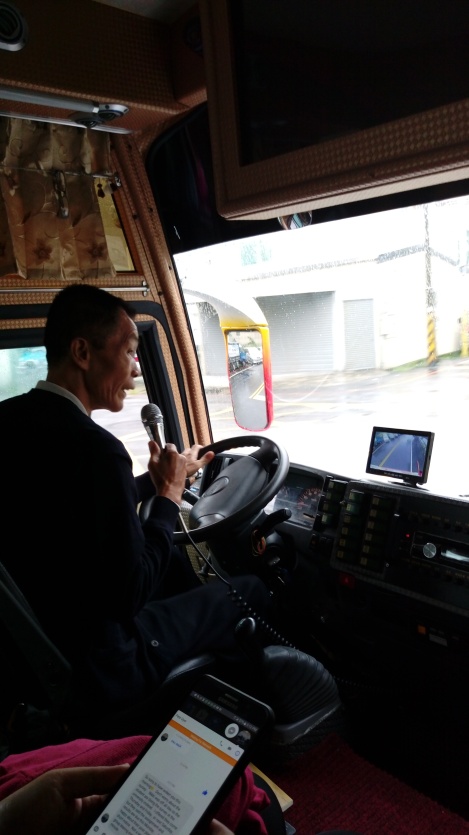 Here come my photos taken during my trip to Hualien. There were moments that I felt myself at a loss for words for the magnificent scenery offered by the Mother Nature in front of my eyes. There were times that I felt like myself walking in a traditional Chinese painting with temple and bridge, mountain and river, waterfall and cliff, etc. Nice poem written by Li Bai, a famous poet of Tang Dynasty, which I learnt when I was at secondary school, suddenly came across my mind:

View of a Waterfall at Mount Lushan

Sunlit is the Incense Summit, aglow in smoke and steam;

To afar, like a drape that glitters, a waterfall hangs upstream:

As if it were the Silver River, falling from the heaven supreme. 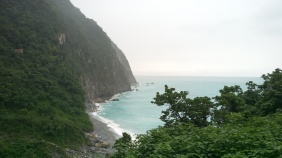 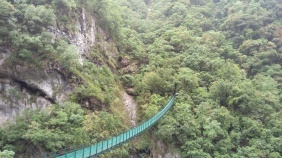 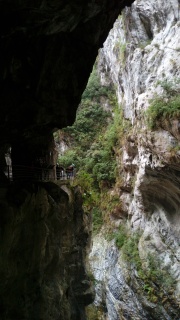 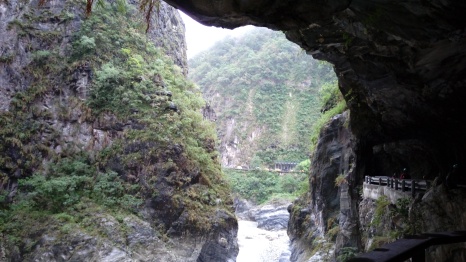 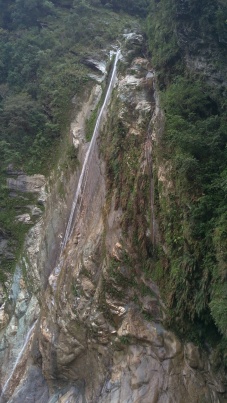 The tour then ended at Qixingtan Beach. The beach is not kind of sandy beach that I used to visit when I was in Vietnam but a beach full of pebble which is not so ideal for swimming. Actually, it was a little bit dangerous so the tour guide kept warning the tourists not to get down the water for fear of its unpredictable depth causing harm to the tourists. However, for one like me, who are not so keen on swimming, it is an enjoyable experience to have a one-hour walk on my own along the beach, play with the pebbles by arranging one on each other and simply sit down facing the wide Pacific Ocean. That feeling of traveling on my own to the place I have long desired for makes me feel somehow satisfactory and lucky for the fact that I am still young and free. 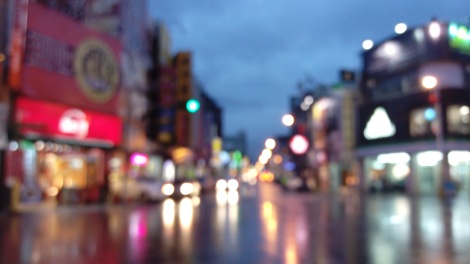 Hualien in the rainy night 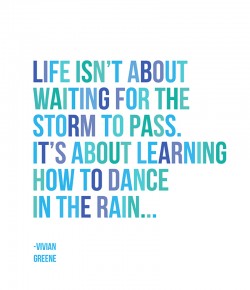